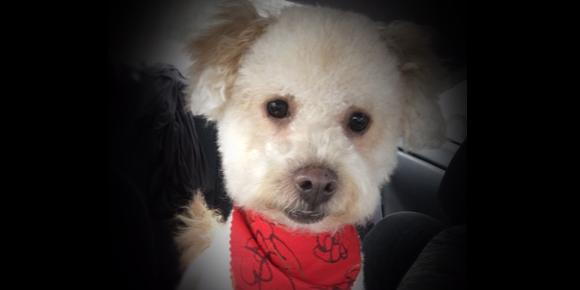 Skipper was a normally vibrant, sweet, 4-year old Poodle that came to The Animal Hospital at Lake Brandt because he had suddenly become very ill. He had started vomiting frequently and was losing weight rapidly. His owner was very concerned about him and was fearing the worst. Skipper had been to another hospital and had many diagnostic tests run but no clear cut diagnosis was made and he was not responding to treatment.

When Skipper was examined by Dr. Pierce, she noticed that he appeared to be regurgitating almost constantly. He would hold his head out, appear to burp and then swallow. The poor little guy was miserable! Dr. Pierce recommended that Skipper undergo a procedure called an upper GI endoscopy. This minimally invasive technique involves inserting a long, fiber-optic camera into the mouth and down the esophagus to the stomach and small intestinal tract. The camera allows the veterinarian to see inside the patient and special instruments are used to obtain biopsies of the stomach and intestines without causing pain to the patient.

Skipper was able to undergo the procedure the very next day. Dr. Pierce placed him under general anesthesia and evaluated his esophagus, stomach and intestines. What she found was that his stomach and esophagus was ulcerated and very inflamed. She obtained biopsies to assist in making a definitive diagnosis. Skipper recovered well from the procedure and was able to go home the same day. He was started on medications to reduce the inflammation in his stomach and esophagus and was started on a special, bland diet.

Within just a few days, Dr. Pierce received Skipper’s biopsy report and discovered that he had an infection in his stomach with a bacterial called helicobacter pylori. This bacteria is often found in pets (and people) with stomach ulcers and was the cause of his almost constant regurgitation. Skipper was treated with an appropriate course of antibiotics and antacid medications and continued to eat the special diet.

The best news is that Skipper has made a full recovery! His owner reports that once again he is her happy, active, sweet boy. He has even started harassing the cat again! At The Animal Hospital at Lake Brandt we are excited that we are able to offer advanced, minimally invasive diagnostics like endoscopy. We love making pets (and owners) feel better!